I actually have no idea. Given that I did it, this might seem odd but there it is. Well, I suppose I can’t say I have no idea. Tracking calories, eating less, and exercising were certainly helpful. But I’ve tried each of those things to some degree in the past. How is that this time I’ve managed to keep going long enough (8 months so far), unlike prior attempts that burned out quickly? Sadly, that’s where I can’t make any grand pronouncements that will work for everyone (and if I could, I’d probably be rich). What I can do is try to hazard a few guesses about what worked for me.

Be haunted by the spectre of your inevitable demise

I turned 40 last year. After spending the better part of the last 15 years 20-30 pounds above an “overweight” BMI, I finally had to come to grips with the fact that time wasn’t on my side. I knew that it wasn’t going to get any easier from here on out and I really wanted to see if I could get things under control before my 40th birthday. This is likely one of the factors that helped me see it through. However, there’s another reason that my age may have helped. Over the years I’ve noticed that my perception of the passage of time has quickened. Working on something that takes months would have seemed an eternity in my 20’s but now seems like a manageable amount of time. Instead of giving up with a barely noticeable shift in weight after a few weeks, now I find myself noticing as the months drift by and the losses accumulate.

Jump in the deep end

Last August my wife and I decided to try the Whole 30 diet. The gist of this is that you cut out lots of kinds of foods (grains, legumes, sugar, dairy, alcohol, etc) entirely for 30 days to see how you feel and then gradually reintroduce them to see which ones have a negative effect on you. (I suppose this was actually my first 30 day challenge, although I wasn’t aware of the concept then) I went into this with a healthy dose of skepticism; any diet with a ™, ©, or ® seems likely to be driven more by marketing than science. The idea that a few categories of foods could be responsible for such a wide range of maladies rings of the dreaded “toxins” so often decried by pseudo-scientific nonsense. In this case though, the idea of eliminating and reintroducing had just enough of an experimental feel that I figured “why not?” and if nothing else cutting out that many sources of calories would certainly jump start my progress.

It certainly did that. I lost 10 pounds in August and we hadn’t even started at the beginning of the month. The experience was generally much less grueling than I thought it would be, although I did come out of it not wanting to eat any more almonds for quite a while as those were one of the few reliable go-to snack options. As for the other supposed health benefits? Well, not so much with one notable exception. Eliminating added sugar produced a noticeable change in how I felt. Specifically, I think that contributed to “smoothing out” the rate at which I would get hungry and made it easier to avoid eating between meals. It’s also lead to a lasting change in the way I eat. I’ve long since reintroduced sugar but I’m eating only a fraction of what I would before. It wasn’t uncommon in the past for me to succumb to a late afternoon craving and make a vending machine run for candy but I’ve been avoiding that entirely. I also haven’t had any kind of soda (artificially sweetened or not) since then and I don’t intend to start again.

Track all the details

I’ve never needed much of an excuse to record and chart data about the most trivial things, so getting into gathering all kinds of data about my progress was only natural. I tracked my calorie consumption using the LoseIt app, calories burned via Apple Watch and weight + body fat percentage via a Bluetooth scale and Apple Health. 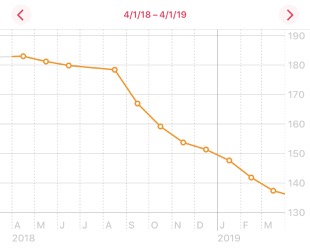 Calorie tracking has gotten convenient enough that I’ve made it a part of my regular routine without much hassle. (I’m currently on a 237 day streak). I don’t measure or weigh everything I eat so I’m sure there’s quite a bit of inaccuracy but I have to hope there’s enough over and under counting that it balances out. I think I’ve gotten a lot better at estimating quantities of measure and even guessing calories for things without looking them up. This is both good and bad, as it can help keep me on track in situations where it’s not convenient to get out my phone but on the other hand now I automatically think about a guess even when I’m just having something I want to enjoy as a treat. 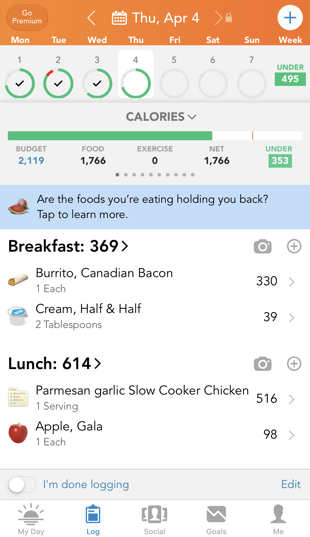 I had used various models of Fitbits for years before this, but they never motivated me to change my behavior the way that the Apple Watch did. It’s hard to say exactly why but the reminders and challenges on the Apple Watch just feel more compelling. Filling the activity rings is really satisfying for some reason, and focusing on calories expended (Apple’s primary metric) rather than steps taken (Fitbit’s primary metric) feels like a more logical approach. 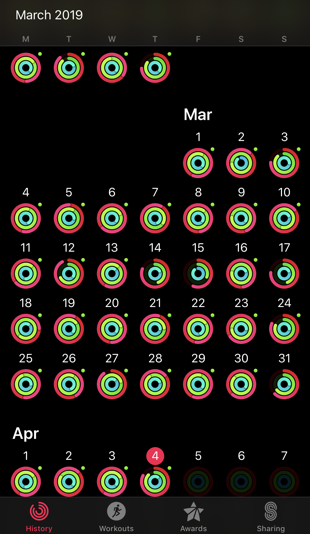 With a reasonably accurate picture of my net calorie loss/surplus and daily weight updates, I’m able to set up a kind of feedback loop and regulate myself. I don’t feel bad if I have a few days where I go over my calorie goal for a special occasion because I can see that those are not the norm and I can see that the trend of my weight is going in the right direction.

Exercise and then exercise some more

Physical activity has never been my favorite thing to do. After a few months of weight loss, my rate started to slow and I knew that to keep making progress without dropping my calorie goals to something unrealistic that I would have to start getting more active. I started by taking a walk after lunch every day, and then ellipticals at the gym and then to jogging on a treadmill. For me, the treadmill feels the most effective. With an elliptical it’s easy to slow the pace without noticing, especially if I’m watching something while I do it. On a treadmill, the pace won’t slow unless I make an effort to adjust it and that keeps me going. I run a 5-4-3-2-1 fartlek (yes really. stop laughing.) program now and I’ve seen a huge improvement from when I started and could barely run for 2 minutes at a time. Another nice data point from my watch has been tracking the change that this has made in lowering my resting heart rate. 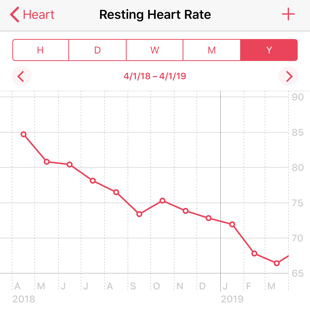 That’s the kind of progress that would otherwise be really hard to see and it has kept me encouraged at times when it feels like my fitness hasn’t been increasing noticeably.

Another app that I’ve found helpful for getting into a good exercise routine is Streaks Workout. It creates a random “playlist” of short exercises that you can do anywhere without out equipment. The first thing you see in the app is a calendar view that shows how long your streak has been going on, which can help give me that extra motivation to keep going on the days that I don’t feel like it. 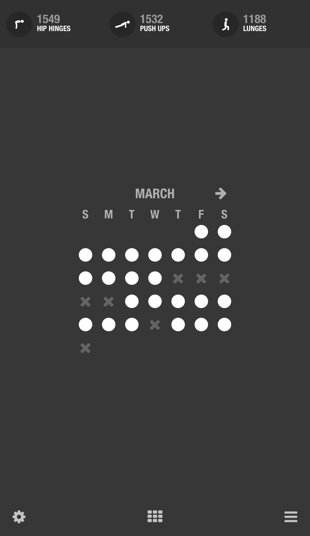 To wrap up, I know all of these things helped me make it to my goal. I just can’t quite explain how they worked this time when I abandoned similar approaches in the past. In the end, perhaps it was a series of seemingly minor differences that added up. By starting with a 30 day window around a diet change, it was easier to get through the hard part because I knew it was temporary. When I got to the end, my mindset had been shifted enough that it was easier to keep from reverting completely to my prior habits. With improved food databases, faster phones and better UI calorie tracking was just enough less inconvenient to be able to become part of my routine. And finally with the Apple Watch’s better user experience around reminders and more types of metrics for tracking progress, I was motivated enough to power through the early morning wake-ups in the dead of winter to go exercise. Or maybe I’d just reached a point in my life where I was ready for it. No matter what the actual cause was I’m glad that I was able to get to this point.